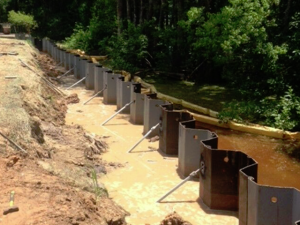 Helical Tieback walls typically consist of cast-in-place reinforced concrete walls, with spread footings and one or more rows of helical tiebacks. They are often post tensioned, and generate pullout resistance past the active zone of the soil behind the wall. Helical tiebacks are typically installed at a 15-20° angle from horizontal, but can be installed at steeper angles if required.

An important factor in building tieback walls is the downward component of force caused by the helical tiebacks. (Each tieback results in a horizontal and vertical component of force in the retaining wall). They must be designed for the weight of the wall facing and downward component of force. As such, an analysis of anchor pullout, lateral earth pressures, overturning stability, sliding and bearing capacity must be undertaken prior to construction. Four of the more common types of excavation shoring are: shotcrete walls, sheet pile walls, solider pile and lagging walls or braced walls.

Helical anchors have many uses when it comes to building and repairing retaining walls, as well as sea walls. 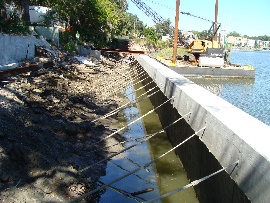 Shotcrete walls can be created by excavating and installing tiebacks (helical or soil nail), followed by shotcrete in several stages – a method often referred to as “top down construction.”

Sheet pile shoring systems are constructed by driving or vibrating continuous corrugated sheet piling through the ground from the surface along the perimeter of an excavation. After sheet piles have been installed, an excavation is made to the top row of the tiebacks. Once the tiebacks have been installed, a steel waler is placed over the anchors and attached to the sheet pile. The process is then repeated from the second, and subsequent rows of tiebacks. 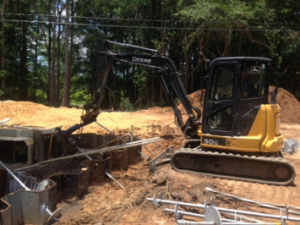 Soldier pile and lagging walls are constructed by driving, vibrating or auguring and placing steel H-piles around the perimeter of the proposed excavation. Once the pile is in place, the excavation is made and timber lagging is placed in-between the H- Piles. At each row of tiebacks, excavation is halted to allow for the installation and construction of a waler.

Helical piles or micropiles can be used for hybrid soldier pile and lagging walls in tight access/low headroom sites. The system would consist of vertical helical piles or micropiles installed as soldier piles. As excavation operations commence, channels are attached to the micropiles (soldier piles) and lagging is installed to support the excavation. Once a lift of lagging is in place tiebacks consisting of either helical anchors or grouted anchors are installed horizontally to minimize lateral deflection.

Braced wall systems can be made with virtually any wall system – shotcrete, sheet pile or soldier piles & lagging. The system typically consists of several square, or round tube rakers, extending from the waler, back into the excavation to a thrust block – usually a micropile or helical pile installed at an angle to the raker.